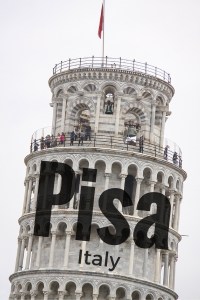 When I was touring Italy with my family in 2014, we had a short stop in Pisa.  I’ve seen so many pictures of the tower through the years, but I was surprised by just how much this thing leans in person!  Most pictures I’ve seen didn’t give me an accurate understanding of its tilt.  I was surprised that it was still standing and that people were allowed up into it because, to my eyes, it really looked like it could topple at any moment.  It’s quite a sight to behold!  Now, you don’t really  have to worry about it falling because extensive engineering work has gone on from 1989-2001 where they have corrected some of the lean and worked to stop any further leaning.  Even with those assurances though, I had no desire to climb to the top! 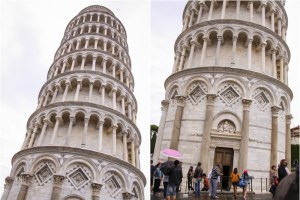 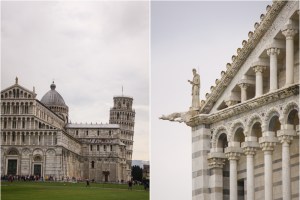 It’s not just the tower that leans though – the church and the baptistery near to the Tower are also leaning a little.  This is because the ground these massive, heavy structures are built on is very soft and couldn’t sustain all that weight well so the buildings have sunk and shifted on the weak soil. 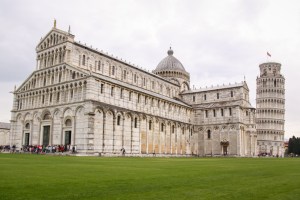 We didn’t have much time to spend in Pisa, but we were planning on heading inside the church and maybe the baptistery as well.  Unfortunately, they change the way they handle tickets sales fairly frequently and we weren’t able to get tickets for the small window of time that we had.  So be aware of that when you plan to go!  If you really want to go inside the church or up the tower, make sure you leave yourself plenty of time – 3-4 hours at least.  Also, check the website right before you leave so you have an idea of the current requirements before you leave so you can plan accordingly.  It was fun to see the tower in person, but it definitely wasn’t a highlight of my trip.  I feel like it’s one of those things that could easily be left out of your itinerary unless you’re really into seeing the major tourist sites.  It’s something I can check off the been-there-done-that list, but not somewhere I’d likely jump at the chance to return.

Would you want to climb the Tower?  Would you include Pisa in your tour of Italy?