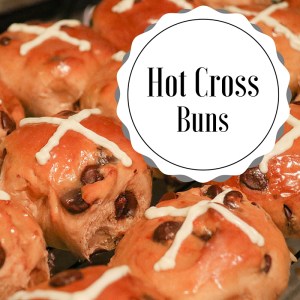 Easter is just around the corner so I thought it’d be a great time to talk about hot cross buns!  I’ve heard about them before but I hadn’t ever had one.   I thought it would be fun to try them and look into the history behind them.

It seems that no one knows for sure just where or how hot cross buns originated.  Some people say that the tradition can be traced all the way back to the Greeks and Romans who served small buns or cakes decorated with a cross during their spring festivals.  However they came about, we know that they were highly popular in Britain in the medieval times.  In fact, they were so well known that in 1592 Queen Elizabeth I made a law forbidding anyone to make or sell hot cross buns except on Christmas, Good Friday, or for funerals.  If they were caught disobeying the law they had to give all their baked goods to the poor.  So by this time, they had come to be heavily associated with Christ and his death.  Ultimately the law became impossible to enforce and was dropped.  Because of this strong history, hot cross buns are traditionally seen as Easter food and are typically only served for a few weeks surrounding the holiday. 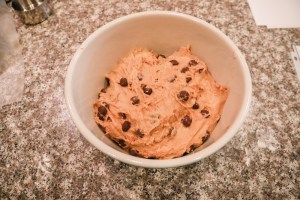 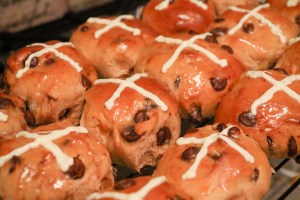 I made two different types of hot cross buns.  The first was a chocolate chip bun.  You can find the recipe here.  (Note that 50g of butter is half a stick or 4 tbsp.)  These were by far my favorite.  They’re more like dessert than bread.  The dough itself isn’t sweet but there are a ton of chocolate chips in it so that makes it delicious!  The dough is pretty dense and heavy so if you’re looking for a light treat – this isn’t it!

I also made some cranberry orange buns.  You can find the recipe here, but it’s in European measurements.  I have a kitchen scale so I was able to convert it to the measurements we Americans are used to.  I’ll post the adjusted recipe below! 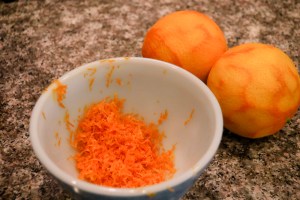 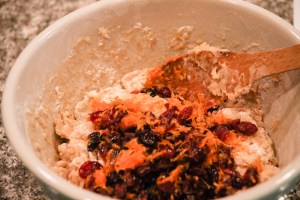 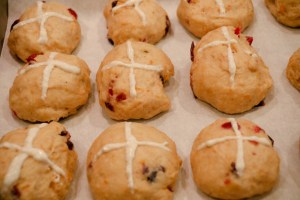 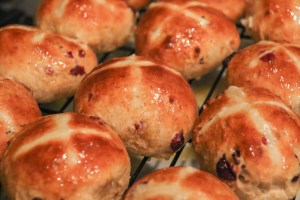 This recipe was pretty good.  Next time I make it, I’m going to add more cranberries and orange zest and possibly cut back on the spice a tad.  These were also fairly dense, but still very good.  The glaze on top is delicious and is a great finishing touch!  They’re not sweet so they can be eaten without any guilt any time of day.

Do you enjoy hot cross buns?  Do you have a favorite kind?  Let me know if you try these and what you think!

Directions –
1. Put the orange zest in a bowl and set aside.  Pour the juice into another bowl, add 1/3 cup boiling water and the dried cranberries, then leave to soak.

2. Meanwhile, pour the milk into a saucepan, add the butter and heat over a low heat, stirring occasionally, until the butter has just melted.  Turn off the heat and beat in the egg by hand.

3. Mix together the bread flour, yeast, 1 tsp. salt, and the mixed spice and sugar in a large bowl. {Note – I don’t know what “mixed spice” is – I used apple pie spice and it worked well.  Also, caster sugar is a very finely ground white sugar but could probably be substituted for regular white sugar.}  Make a well in the dry mixture and pour in the milk mixture.

4. Drain the cranberries and add to the bowl with the orange zest, then mix into the dough with a wooden spoon until it comes together enough to handle without getting too sticky.

5. Tip out onto a floured surface and knead for 5 minutes until smooth and elastic – you’ll need to keep poking the cranberries into the mix as you go.  Grease a bowl with a little oil, then add the dough and cover with plastic wrap.  Leave somewhere warm to rise for 1 hour.

6. Once risen to twice the size, turn out the dough onto a lightly floured surface.  Knock it back by kneading for about 1 minute – this will get all the large air holes out and give you nice even buns.

7. Divide the dough into 16 equal pieces, roll into balls and lay on baking sheets lined with parchment.  Put a plastic bag (or plastic wrap) over the baking sheets and leave to rise for 1 hour more.

8.  Heat oven to 400 degrees.  Mix together flour and water to form a sticky consistency.  (But not too thick – you need to be able to pipe it through a bag!)  Spoon into a piping bag (or a ziploc with a small hole cut in the corner) and pipe onto each risen bun.  Put the buns in the oven for 2-22 minutes until brown on top.

9.  While the buns are baking, make the glaze.  Pour the juice of one orange into a saucepan and mix in 5 tbsp. of apricot jam.  Bring to a boil over low heat, then simmer for 3-5 minutes – you’ll need to keep an eye on this the whole time and stir it to stop it sticking.  {Note – I made a different glaze.  I used the juice of an orange and mixed it with powdered sugar and some almond extract until I had a nice glaze thickness and the flavor I wanted.}

10.  Once the buns are cooked, put them on a wire rack and immediately paint with the glaze.  Leave to cool, then eat with butter.  Will keep for a couple days in an airtight container

Aebleskiver Recipe – Food Around the World